トップ > モルトウィスキー > Review of Yamazaki 2020
Today, I would like to share with you a review of the 5 series of Yamazaki 2020, which is a hot topic in the world, at Ron Cana, a bar in Toyota City yesterday. This is my personal impression, so I hope you will read it for reference only. 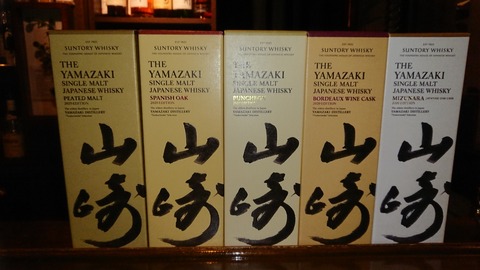 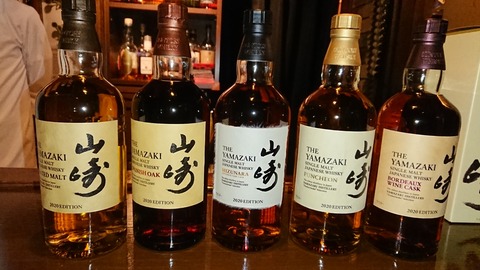 
The master also considered the order in which I would drink, and decided to order the bottles that the master arranged. The five series of Yamazaki 2020 this time are

consists of. I would like to drink in this order. 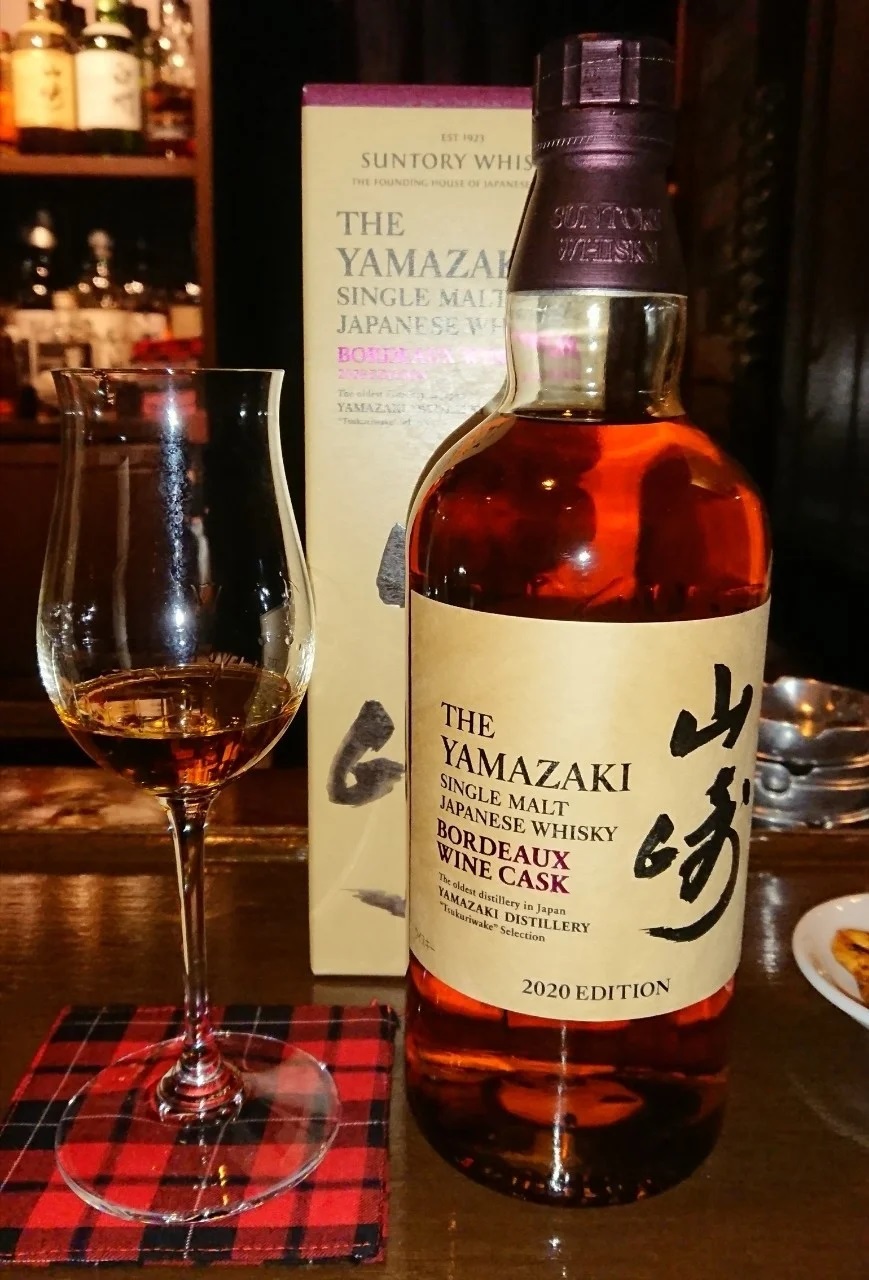 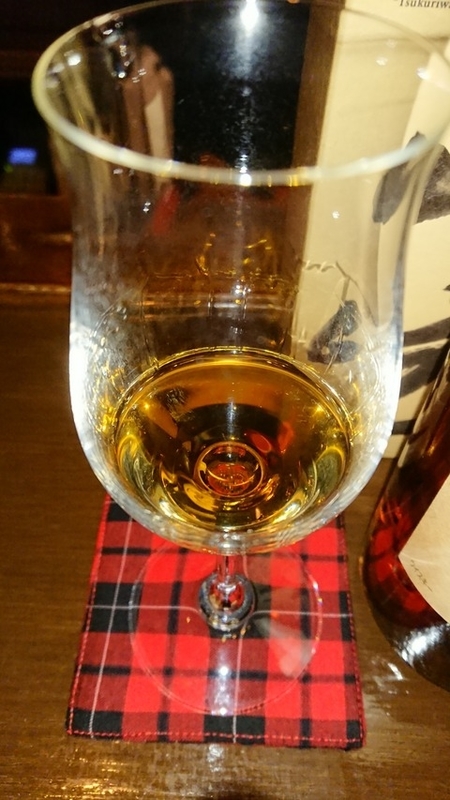 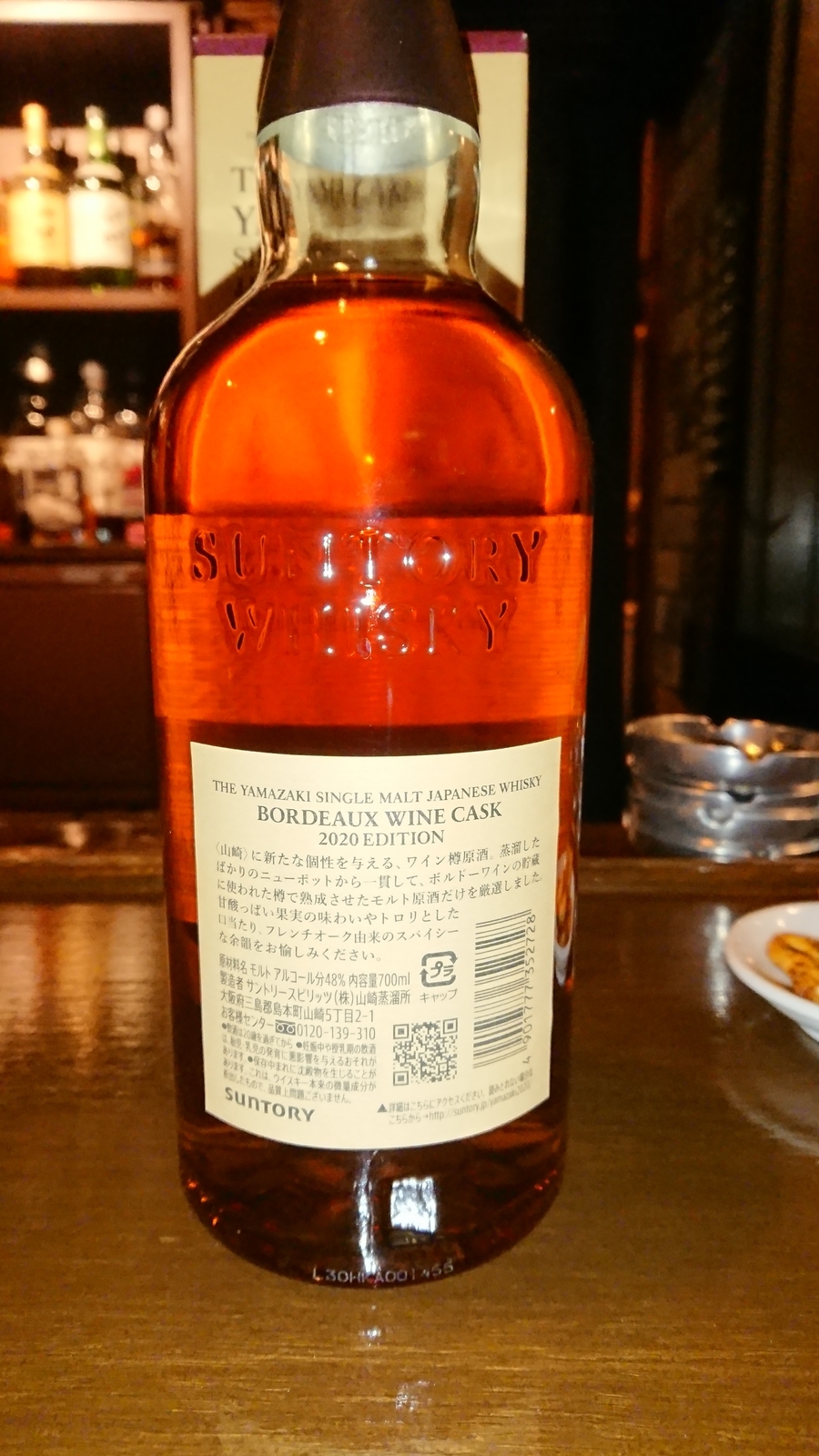 The first is the Yamazaki Bordeaux Wine Cask 2020 Edition. French oak barrels used to make French Bordeaux wine are used for aging Yamazaki. Suntory, which is particular about barrels, makes strict checks and uses it for aging whiskey, so high degree of perfection is expected.

When you actually drink it, you can feel the fresh aroma of wine. It has an oily and fragrant taste that makes you feel Yamazaki when you put it in your mouth. You can feel reassured that it is the taste of Yamazaki. The sweet taste comes from Bordeaux wine barrels.
The characteristic of this whiskey is the approach of fresh scent that comes first. Many Bordeaux red wines have a deeply submerged taste, and this aroma is strongly conscious of such red wines. I think that those who like wine will surely be satisfied if they drink this Yamazaki. 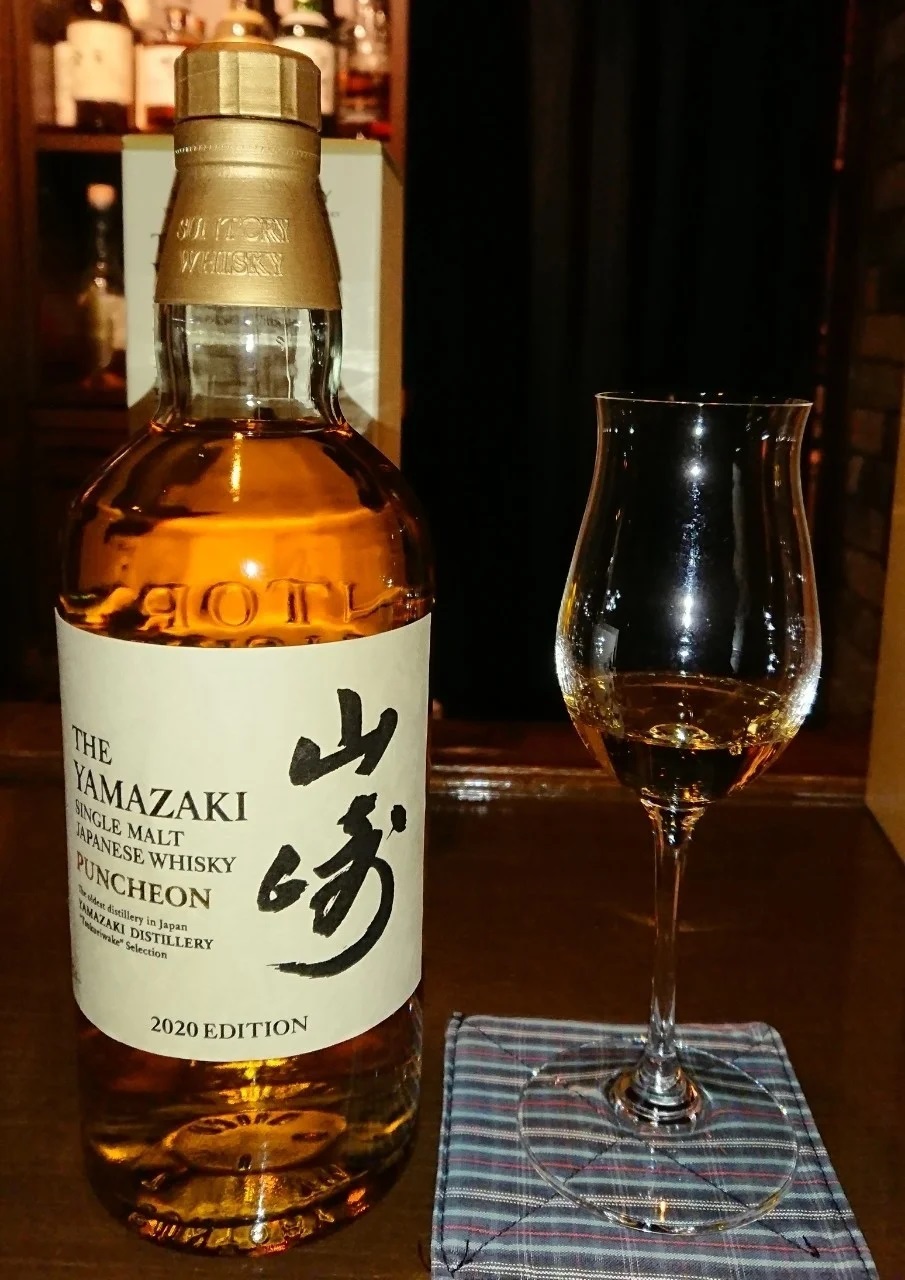 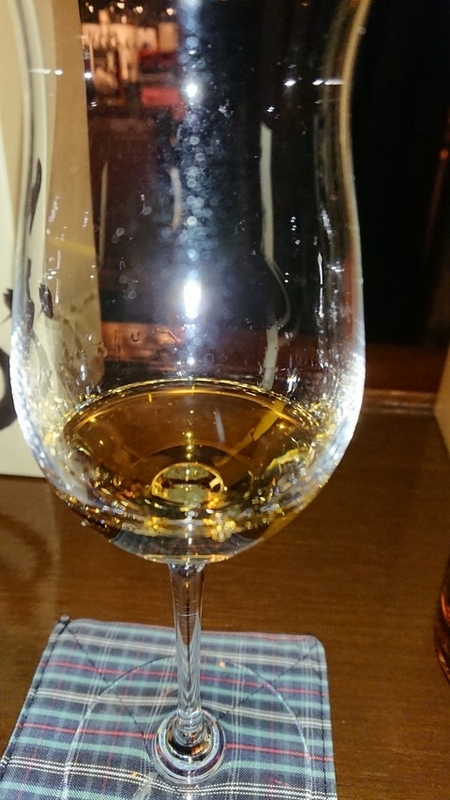 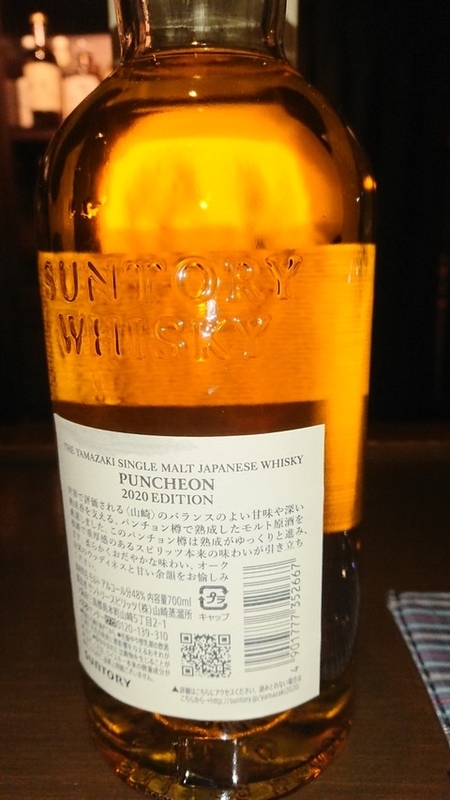 This Yamazaki is aged in Panchon barrels (capacity 480ℓ). In addition to Panchon, whiskey barrels include Hogshead (capacity 230ℓ) and barrel (capacity 180ℓ). Panchon barrels can store the largest amount of whiskey, and because there is less contact patch between the whiskey and the bark, the scent of the wood slowly shifts to the whiskey, and I think it is characterized by its mellow aging.

A scent reminiscent of a refreshing meadow, with a soft and smooth taste. I don't feel the Yamazaki-like taste as I expected, but it has a well-balanced taste. The sweet aroma opens over time and the fruity nutty taste spreads. Personally, I thought it was the second most delicious after Mizunara(Quercus crispula Blume). 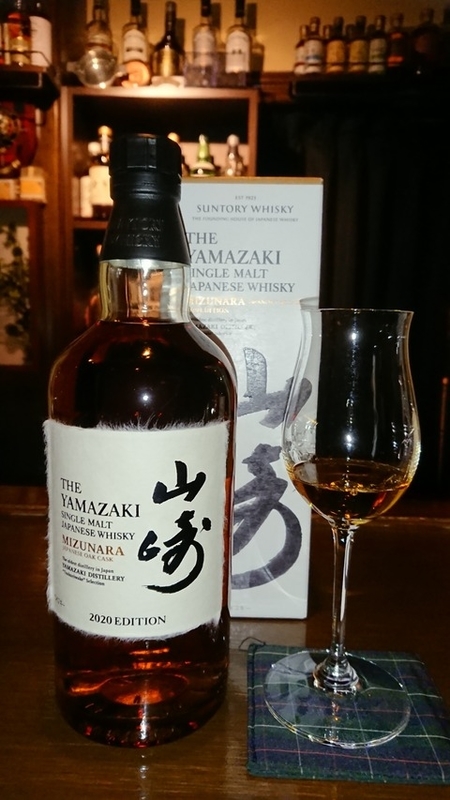 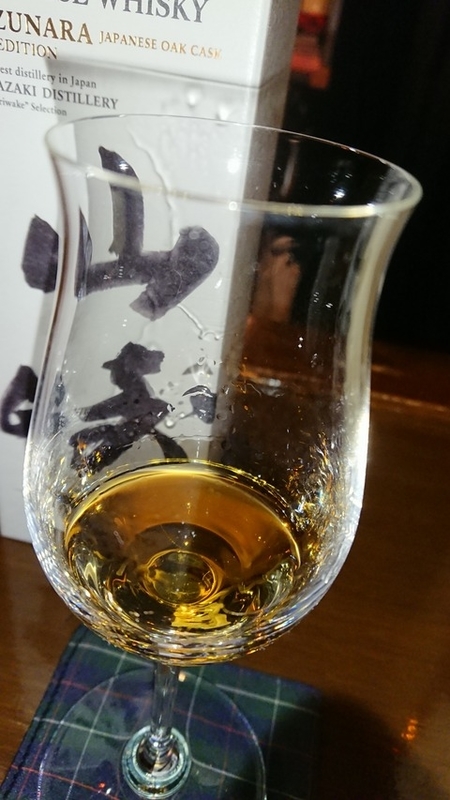 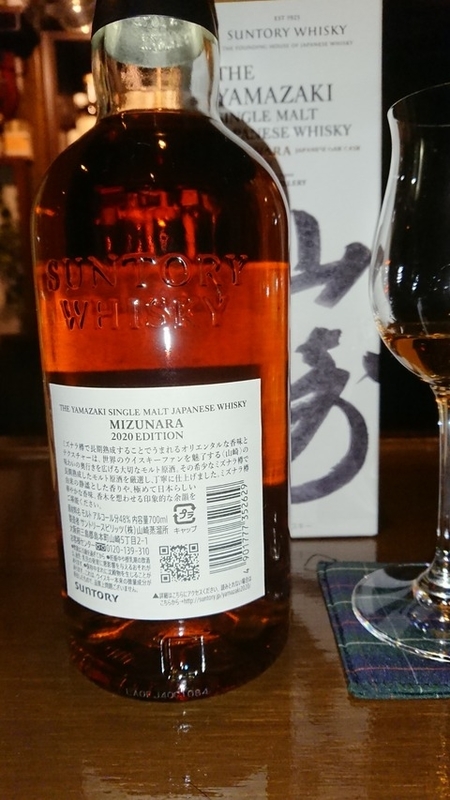 I think the Mizuunara bottle is the flagship of Yamazaki 2020. Without a doubt, it is the best of the five. In the series, the only list price is in the 30,000 yen range, which is higher than other bottles. This is not something to think about, but if this product is so popular at the bar that orders are concentrated and other bottles are left unsold, the store manager may have a hard time. This deliciousness is something that you should definitely enjoy while enjoying the difference in taste with the other 5 bottles as a set.

By the way, it seems that this Mizunara, non-aged and 18-year-old ones have appeared in 2017, but now it is priced at hundreds of thousands of yen. This bottle will probably be a premium bottle as well, but I definitely want you to enjoy it at the bar without investing in it. Instead of investing in whiskey to make money, you can make money by investing and taste delicious whiskey even if it is a little expensive. I wonder if that is what it really is.
A deep taste like the old bottle of Yamazaki 12 years and the current bottle of 18 years, the flavor of intricately intertwined fragrant wood. The afterglow is the feeling that a different character appears after each drink. It's good without complaint. This time Yamazaki 2020 is all non-aged, but I felt that it also contained a good old sake aged in Mizunara barrels. It is also tasteful that the label is Japanese paper only for this bottle. 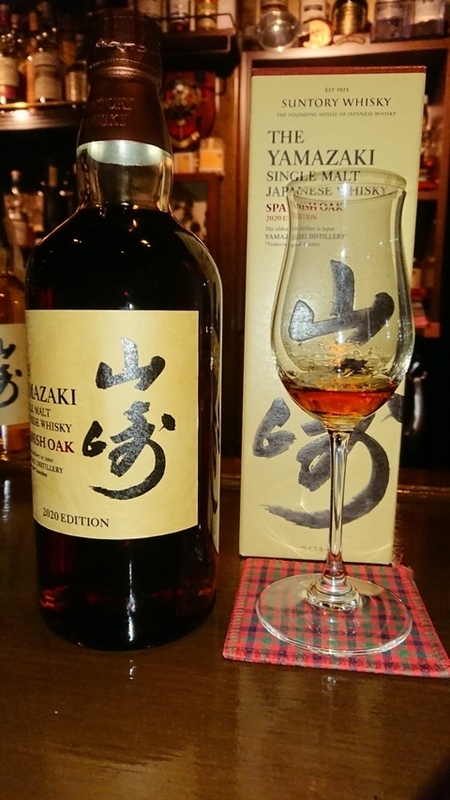 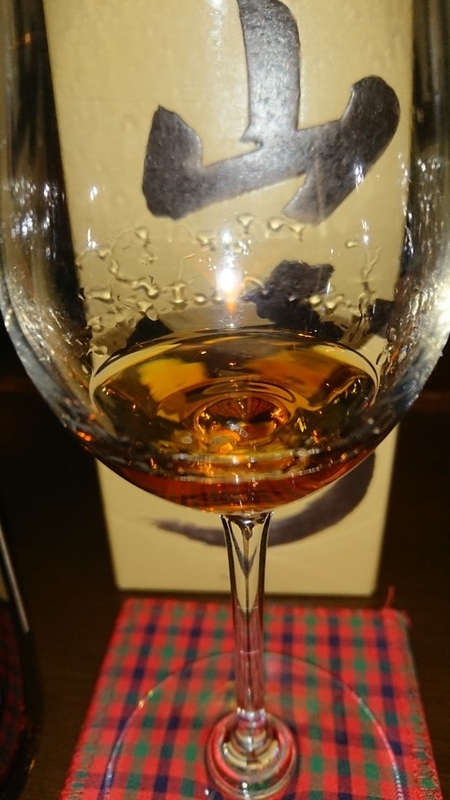 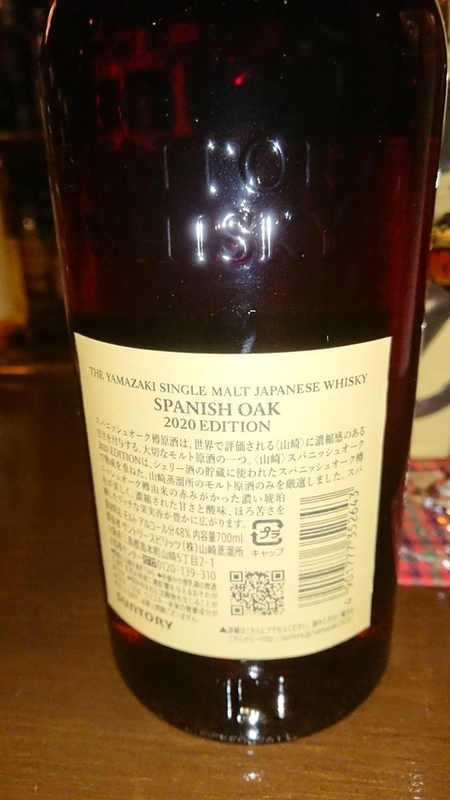 Compared to American oak, the Spanish oak used for aging Yamazaki contains a lot of tannins in the wood, so it has a rich, mellow aroma and a deep color. If you look at the picture of all the bottles lined up again, you can see that the color of this bottle is very dark. It will be the second bottle from the left in the photo above. The scent gradually changes from a weak clear grass scent to a sweet scent with a core. When you put it in your mouth, the strong sweet taste spreads. People who expect Yamazaki-ness cannot feel Yamazaki, so some people may be dissatisfied. This type of attempt has also been made frequently in Scotch single malts these days. I think whether it works or not depends on whether the recipient is within the acceptable limits of the series. From that point of view, this bottle may feel a little overkill. It may be evaluated as a completely different whiskey. 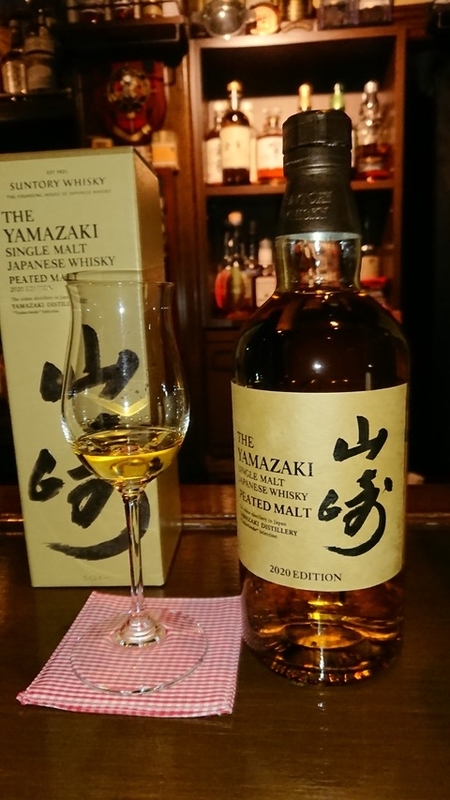 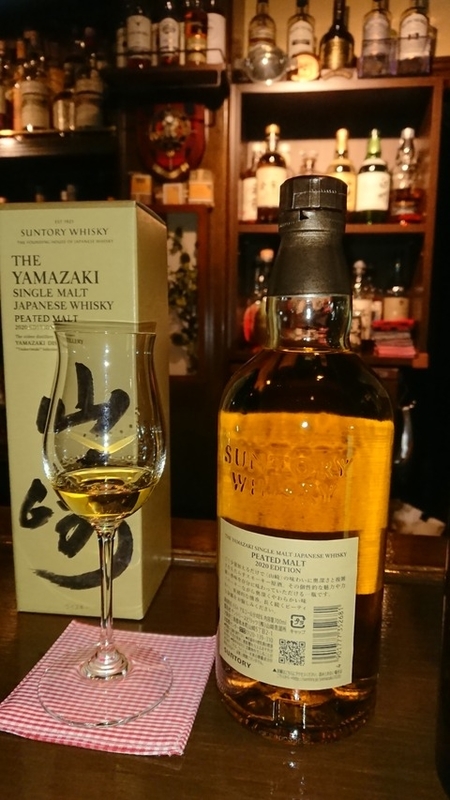 I am participating in the next blog ranking. I am very happy if you can click it! 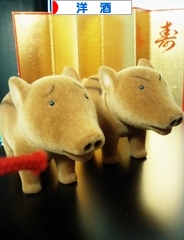 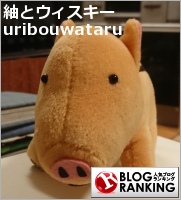